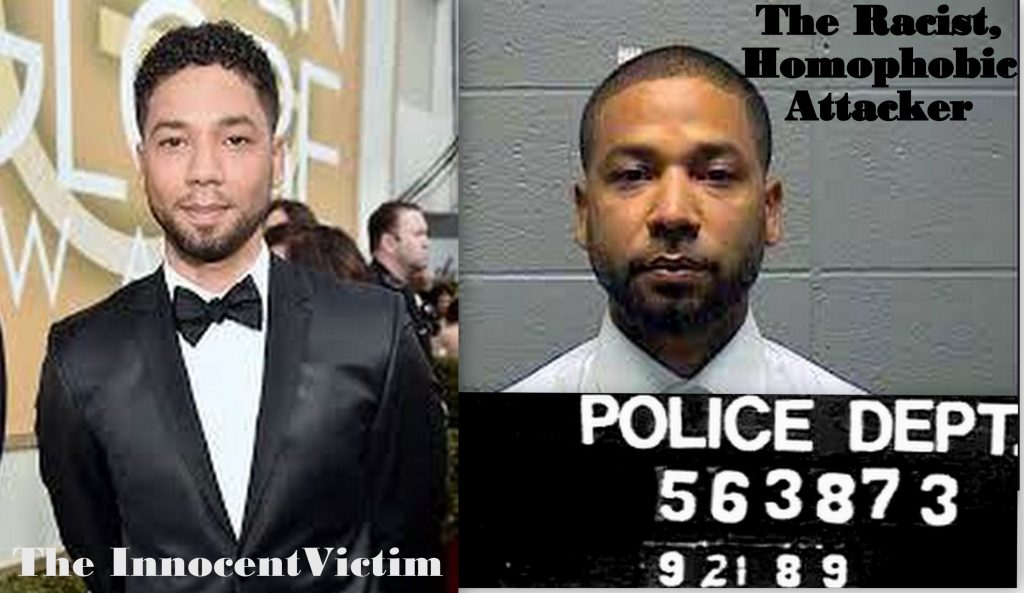 Finally, justice has been served. The evil, wicked, mean, bad, and nasty perpetrator who planned and executed the racist, and homophobic attack on actor Jussie Smollett has finally been brought to justice. (The attacker’s racism, homophobia, and overall badness is clearly evident in the above photo of the victim.)

After receiving racist and homophobic letters at the studio where he was formerly employed, Mr. Smollett was deliberately and viciously attacked on the night of January 29, 2019 while innocently walking home at 2 am after innocently purchasing a Subway sandwich. (Mr. Smollett’s innocence is clearly evident in the above photo of the attacker.)

The attacker used racist and homophobic slurs, struck Mr. Smollett, wrapped a rope around his neck and doused him with an “unknown substance”. The attacker then bellowed that Smollett was in “MAGA country,” an apparent reference to President Donald Trump’s “Make America Great Again” campaign slogan (which slogan is obviously racist, sexist, homophobic, Islamophobic, and claustrophobic!)

Fortuitously, the attacker did not cause Mr. Smollett to drop his Subway sandwich.

The attacker was caught and sentenced this week to 150 days in prison and thirty months’ probation! (Not nearly enough jail time considering all the heinous acts that he committed). Thank God

After the sentence was pronounced, Mr. Smollett swore that his account of the incident was 100 percent factual and correct. It was, except for one detail, he misidentified the attacker, who was not, in fact, white (nor was he straight)!

Thanks to the prison sentence meted out by the court today, the streets of Chicago are safer tonight. Especially the ones near Subway sandwich shops at 2 am!