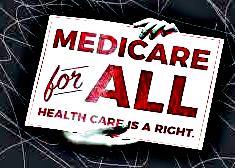 Medicare For All – Including Me!

LOWGAP, NC – Great news!   Aunt Elizabeth (a/k/a Senator Elizabeth Warren) has proposed a health plan that will provide all of us with free health care, forever.  And, better yet, her plan has no deductibles or copays !  This is just what every American needs.

Unfortunately, Aunt Elizabeth was forced by evil white male Republicans, to reveal the cost of her plan – 5.3 trillion dollars a year (although many believe the true cost would be double that).  Off the top of my head, this seems like a lot of money, but I am not worried.  Aunt Elizabeth has promised that the entire cost of the plan will be borne by people richer than me and I make it a point to support any plan that will benefit me and is paid for by someone else.

However, since the cost of the plan was so high, I decided to see how much the rich would have to pay to keep my plan going.

I determined that there are 607 billionaires in the United States (despite the failure of Capitalism as an economic system) who would probably be paying for this plan. Using mathematical algorithms that are far beyond the understanding of most Americans, I determined that to pay for Aunt Elizabeth’s wonderful plan, every billionaire in America would only have to pay an additional 8,566,721,581.54 in taxes each year.  I know they are rich, but having to pay an additional 8.5 billion in tax each year might be difficult for some of them, especially those who are worth less than 8.5 billion dollars, although on the positive side, billionaires worth less than 8.5 billion dollars would, after paying the first year’s tax, not be billionaires anymore and, therefore, not be obligated to pay any future tax!

I am so happy that Aunt Elizabeth designed this plan for me that, once it is in effect, I am going to have every diagnostic test in the book!  After all, I am old and you can never been too careful.  Besides, thanks to Aunt Elizabeth, these tests will cause no financial pain or any physical pain either, except for the cystoscopy.  Maybe I won’t have that test.

Elizabeth Warren is the annoying Aunt we all have.  We love her, but we just wish she would shut up and go home.

I think we all agree that copays are unfair.  Recently, I had laser eye surgery.  Numerous expensive eye medications were used in the procedure, a very expensive laser machine was needed and I required at least an hour of the time of a highly paid eye surgeon and a less (but still substantially) paid nurse.  These scoundrels forced me to pay $100 in copay charges for the surgery.  Disgraceful!  PS the surgery did work, I can see again, but it still should have been free!

I divided the annual cost of the plan (5.2 trillion) by the number of billionaires (607).

Tax the rich, feed the poor. ‘Til there are no rich no more? ~Alvin Lee, I’d Love To Change The World, performed by Ten Years After

I looked at the statistics and discovered how important health care is.  No American born before 1900 had health care and every single one of them is now dead.

Interestingly, it was Benjamin Franklin who invented the urinary catheter (the forerunner to the godawful instrument used in a cystoscopy).