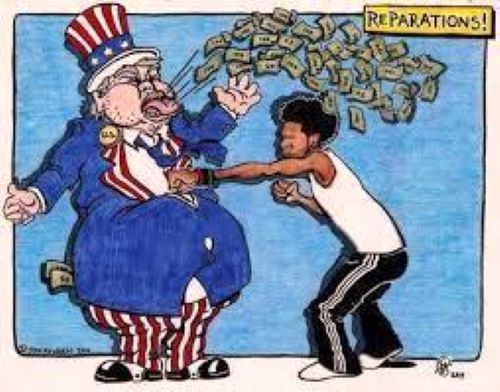 REPARATIONS FOR SLAVERY?? SURE, LET’S HAVE FUN!!

Other Americans say that the idea of reparations is preposterous. After all, no living American should pay for a non-crime that he/she/they  didn’t commit over 150 years ago merely because those who committed the then non-crime had a similar skin color.

They also argue that reparations are unconstitutional because they work an attainder and a corruption of blood, both of which violate Article III, Section 3, subd. 2 of the United States Constitution (See Reparations – Corruption of Blood or Bloody Mess at https://www.meaningoflifesatire.com/2019/12/18/reparations-corruption-of-blood-or-bloody-mess/ at The Meaning of Life ~ World’s Greatest Political Satire!!).

Finally, they point out that reparations are arbitrary (they are), stupid (the jury is still out), will pit American against American (Yup), and will foster distrust and, yes, more racism.

Unlike the others, we at MOL have thought the problem through. As such, we concluded that while reparations are, in fact, arbitrary, racist, discriminatory, and, yes again, stupid, and they will ultimately fail, we should institute them. Why? The answer is easy, will have a ball instituting them and, if we ever are able to institute them, the result will be hilarious! After all, we need a break from Ukraine/Russia, inflation, crime, recession, and Slo-Joe. Here is our idea:

Our (Humorous) Way to Institute Reparations

We must determine who will pay reparations and who will receive them. How can we do this? There is only one way: re-segregate America! After all, how can we set up a payment system without knowing who will pay and who will be paid? Re-segregating Americans will be fascinating, interesting, offensive, on the far side of ridiculous, and will push our country to the brink of  idiocy and madness. What could be more fun than that!!

Look at that, we haven’t even started paying anything yet and we have pissed off the entire country!!

How can we accomplish the great American re-segregation? As we see it, there are three methodologies that could be used: a political method; a scientific method; or a practical method.

If we use a political method, we must pass a law that will classify all Americans. What this new law (or laws) will look like is anyone’s guess, but we do have at least two prior laws to guide us. They are:

We at MOL prefer think using this law as a standard would be the fairest and most inclusive. After all since everyone has African Blood, under this method, EVERYONE would be entitled to reparations. What could be fairer and more inclusive than that!!

If we can’t agree on a political method of classification, we could use a scientific one. There are two scientific ways to segregate{4} Americans by skin color. They are:

If we can’t agree on a political or a scientific method of segregation, we could use a practical method. An American could be classified as a descendant of slaves if he/she actually had ancestors who were slaves. An American would be classified as a descendant of masters if, in fact, they had an ancestor who held slaves. While this method seems the fairest, it is also the most problematic. Besides the heavy-duty reliance on Ancestry.com and all the fraud and the bribery that would follow, not all living African Americans would receive reparations. In fact, some would have to pay them{5}. This will ruin the narrative!! In addition, there would be a few paradoxes. For example, Kamala Harris is black, yet her ancestors held slaves!!!  Would she have to pay reparations . . . to herself?

While we are on the subject, we humbly suggest a few “common-sense” modifications to any reparations plan:

Oh yes, one final point. How will we calculate the interest due on reparations? They are, after all, 155-401 years overdue.

History is On Our Side NOT!

Reparations for “slavery” will be fun to institute in America. But historically, reparations never work. American Indigeians  have been receiving reparations from the U.S. government since 1934. These reparations have not helped them nearly as much as the pure unfettered (and monopolistic) capitalism they enjoy by operating casinos and selling non-sales taxed cigarettes and beer!

And, of course, there is Germany. After World War I, Germany had to pay massive reparations to the allies.  We know what that led to!

{1} It should be noted that those Americans classified as descendants of masters might not (actually, almost certainly didn’t) have had any ancestors who held slaves. Similarly, Americans classified as descendants of slaves might not have had any ancestors who were, in fact, slaves.
{2} The day New Orleans (which contained most of the population of the state) fell to the Union.
{3} Interestingly, Homer Plessy (Plaintiff in the famous Plessy v. Ferguson Supreme Court case) was only 1/32 African. Even though he looked white (and somewhat French) he still couldn’t ride the railroad because he “failed” the 1/32 test!
{4} We at MOL have always been opposed to segregation, but since some Americans want reparations today, reparations tomorrow and reparations forever, it seems we must now, unfortunately, adopt the motto, Segregation Today, Segregation Tomorrow, Segregation Forever!!  I don’t think this is what Dr. King had in mind!
{5} In 1860, there were 393,000 slave holders in the United States. About 3,200 of them were African American.
{6} 364,000 Northern soldiers were killed in the Civil War, 281,000 were wounded.
{7} We can’t use the Prime Rate because it wasn’t invented until 1947.

16 thoughts on “REPARATIONS FOR SLAVERY?? SURE, LET’S HAVE FUN!!”