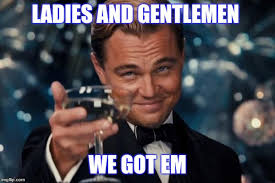 Finally, We Got ‘Em

AURORA, WV December 9, 2019 With Adlai Delano, Lyndon Fritzgore, Hubert Pocahontas, and Fitzgerald Carter-Clinton, Jr.  As you might have heard, we, the intelligentsia of America have been trying to nail President Trump er, I mean, construe President’s Trump’s relatively innocent actions as Treason, Bribery, and OTHER High Crimes and Misdemeanors, er, I mean, prove Trump colluded with the Russians,  er, I mean prove that Trump obstructed justice, er, I mean, prove Trump entered into a Quid Pro Quo Agreement, er, I mean, show that Trump bribed a foreign country or accepted a bribe from a foreign country or something like that, er, I mean, finally, after numerous fishing expeditions, prove that Trump obstructed justice again. Thank God, we finally got him on something, let’s impeach immediately, er, I mean, Since there is a scintilla of evidence that the President of The United States, the damnable er, I mean, The Honorable Donald J. Trump, The Dems, er, I mean, The United States House of Representatives, a co-equal branch of the government, must nail the sucker, er, I mean, exercise their duly empowered constitutionally mandated duty and obligation to have a show hearing, er I mean, investigate the President’s acts of malfeasance and turn their  findings over to the biased, racist, bigoted, homophobic, Islamophobic, sexist, hack Republicans, er , I mean, The United States Senate, another co-equal branch of the government.

Everyone knows, er, I mean, The House of Reps will find that Trump is guilty as sin, er, I mean, Trump’s actions are High Crimes and . . . Misdemeanors.   (We feel that leaving out the word “other” is unimportant.  After all, not every word in the Constitution counts!)

Once this is accomplished, we will finally overturn Trump’s election by a basket of deplorables, er, I mean, the noble duties and responsibilities mandated by the Constitution, will have been achieved and the House will have shown its wisdom and mental dexterity by impeaching Trump without ever articulating an impeachable offense.

Since no other president in U.S. history ever fired a high level government employee or claimed Executive Privilege, or ever will, the House’s impeachment of President Trump will not limit or constrain any future presidents, as long as they are Democrats.

The name Pocahontas comes from an archaic derivation of the Japanese name Pokemon.
We intelligentsia are smarter, more politically astute, more knowledgeable, more liberal and better looking than you, the average deplorable American.
After all, we couldn’t beat him fair and square.
If you understand the definition of the word “other” and have at least a passing acquaintance with the syntax and grammar of the English language, your will know that the word “other” in the impeachment clause of the Constitution relates High Crimes and Misdemeanors back to Treason and Bribery.  Grammatically speaking, this means that the phrase “Treason, Bribery and OTHER High Crimes and Misdemeanors, clearly requires that the “Other High Crimes and Misdemeanors” be equally odious and heinous as Treason and Bribery.   I wonder why my intelligentsia colleagues always leave the word “other’ out of their recitations of the grounds for impeachment?   (Author’s Note: If the word “other” is not considered, a high crime or misdemeanor is anything Nancy Pelosi, Adam Schiff, or Jerry Nadler says it is.  It is also, therefore, whatever a future, crazed, racist, hack Republican committee chairman says it is when he/she wants to impeach a wonderful, upstanding Democrat president.
What has gotten lost in this whole tableau is the fact that collusion is not a crime. Surely my fellow intelligentsia must know that; a few have I.Q.s in the triple digits.
By firing high level government employees and claiming Executive Privilege, neither of which is permitted by the Constitution and/or Federal Law!  Wait a minute.  I just read the Constitution and Federal Law.  It looks like both of these acts are permitted.  I must get my intelligentsia landsmen to look into this.
Like we all do, daily.  Just last night I entered into a Quid Pro Quo Agreement with a restaurant.  I promised to pay them, only if they served me food.
Like Joe Biden did.
A Fishing Expedition is defines as a search or investigation undertaken on no evidence, taken with the hope, though not the stated purpose, of discovering information.
Actually, obstruction of justice requires a party to violate a court order; Trump merely refused congressional requests for documents and people!
Actually it’s one half of a co-equal branch, but let’s let the claim slide
The Senate is also only half a branch.
Thank God!
Oh my Goodness, I just discovered that all American presidents, except William Henry Harrison, hired and fired high level government employees. (Harrison only served 30 days, was sick for eight of them and never had a chance to fire a high level government employee.)
Oh my goodness again, I also discovered that Washington, Jefferson, Jackson, Truman, Eisenhower, Nixon, Clinton (14 times), and Obama also claimed Executive Privilege.  Let’s keep this information under our hats.