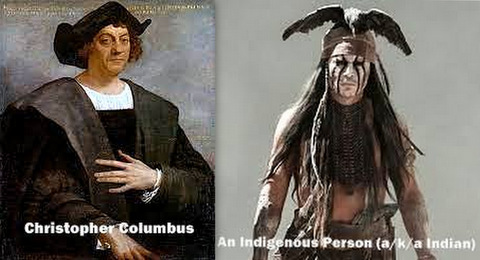 Let’s look at the libs narrative and, for the first time, the real facts.

Columbus did nothing. Even worse, he did less than nothing. Inadvertently and through no effort on his part, he stumbled to America. When he got here, his sole intent was to deliberately kill everyone and and/or infect them with loathsome diseases.

Through dogged determination and brilliant negotiating skills, Columbus persuaded the King and Queen of Spain to provide two million Spanish maravedis(3) to fund his voyage. Utilizing the same dogged determination as well as skillful seamanship, Columbus led three extremely small(4) ships over 4,500 miles of a hitherto uncharted and unknown ocean to “discover”(5) two entire continents (and a plethora of wonderful vacation islands) that today accommodate over 960 million people in peaceful and prosperous countries(6). One of these countries (us, of course) has become the world’s beacon of freedom and liberty (libs notwithstanding!).

When Columbus arrived in the Caribbean, the Arawak branch of the American Indigian (f/k/a/ Indian, then American Indian, then Injun, then Native American, then indigenous American people, hence now, American Indigian) were in the process of being eradicated (and enslaved(7)) by the Caribes, a “brother” indigenous race. Bravely, Columbus prevented this extinction(8) event. Granted, he did so by killing a lot of Caribes, but to make an omelet, you have to crack a few eggs. Anyway, thanks to Columbus, there are still Arawaks with us today!!! Hooray!!!

Columbus did introduce some diseases to the New World, but since Robert Hooke and Antoni van Leeuwenhoek wouldn’t discover germs until the late 1600s, Chris(9) can’t be held responsible for knowledge that wouldn’t be discovered for another two hundred years! Besides, in retaliation, the indigians “introduced” Columbus’ crew to syphilis, which is nothing to clap about!

Let’s applaud our wonderful hero, Christopher Columbus, and drink a bottle or two of fine Genoese Vermentino in his honor on his wonderful, wonderful day!

(1) Well, libs say the Indians are a tough as rocks and several Indian creation stories say they originated in fire, so calling them igneous Americans is not too far afield!
(2) They were here for 20,000 years and weren’t even smart enough to invent/discover the wheel.
(3) About a million U.S. dollars today.
(4) The Nina and Pinta were fifty feet long, while the Santa Maria was seventy feet long.
(5) I know, there were already people here and the Viking popped in around A.D. 1000, but neither accomplished much.
(6) Socialist Cuba and socialist Venezuela excluded, of course!
(7) We all dislike slavery!
(6) We all really dislike extinction!
(8) As a fellow Italian, I can call him Chris.
(9) A Ligurian wine with flavors and aromas of citrus, tropical fruit, acacia, rosemary, thyme, and a salty finish.

Please Make a Donation to Keep Political Satire Free and Out of The Hands Of the Elite Establishment. Remember, We at MOL are Political Artists. As Such, We Need the Monet to Buy Degas to make our Van Gogh.