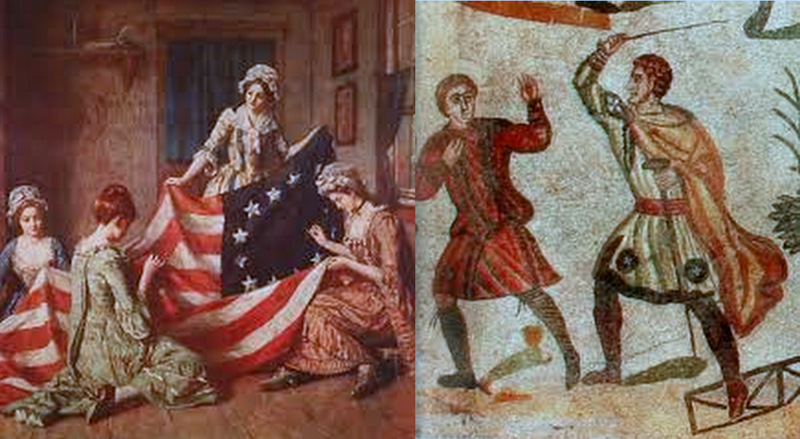 (First Published 10/23/2019) WHITE CITY, OR – In 2019, Nike, Inc. (a large corporation run by rich White males) stopped the release of the Air Max 1 Quick Strike Fourth of July shoe. The reason? It bore the symbol of the Betsy Ross Flag{1}. Nike’s “Brand Ambassador”, former quaerterback Colin Kaepernick (a/k/a FQCK) advised them that this flag was offensive due to its connection to the United States’ slavery era{2}.

The Claim of Racism

Like all liberals, quaerterback Kaepernick missed a few things. The first is that Betsy Ross almost certainly did not design or sew the American flag. The only evidence of her actions was provided by her grandson over ninety years after the alleged designing and sewing. In fact, the flag was probably designed by a committee appointed by Congress. (Of course, if FQCK wants to ban Congress, MOL is with him). There is no evidence that Betsy ever thought about slavery, let alone designed a flag to connect with it!

One more interesting fact. Barack Obama used the Betsey Ross flag at his rallies. Is FQCK calling Obama a racist? Gee, that would be like the pot calling the kettle. . . . Uh, never mind.

It is true that Betsy’s flag has been adopted by the white nationalist group Identity Evropa (rebranded in March 2019 as the American Identity Movement – probably because everyone is trying to kill them). But they only have 580 members, all of whom are horse’s asses. Why should we make important political decisions about our national heritage based on them?

It is also true that the Klan used Betsy’s flag as a symbol before the Civil War. Two things about that: One – Klan members were and are idiots{3}. And Two – That was a hundred fifty years ago. Get over it!

Interestingly, FQCK missed the fact that Betsy’s flag was also a symbol of the pre-WWII German-American Bund, a Nazi front group. His researchers must not be as skillful as ours.

Anyway, I’m pretty sure that Betsy wasn’t a White Nationalist, a Klan member, or a Nazi. She just designed and sewed a flag, maybe.

Since FQCK had such a memorable NFL career, is a brilliant student of American history, and is an  extremely enlightened humanist, he must be right, both about Betsy and about her flag’s connection to slavery. Because of this offensive and racist connection, we at MOL have been inspired my by Mr. Kaepernick (and Nike, Inc.) and have joined his (and their) quest. We began searching for other racist symbols connected to the slavery era. These symbols must be rooted out and forever banned from our society forever!

Fortuitously, we have just found such a symbol right under our very noses. Mathematics!

The discipline of math has long been the bailiwick of white men, all of whom have had connections to slave holding eras. To make matters worse (and more racist) the work of these men (I.e., adding, subtracting, et al) has profoundly abetted all slave holders. What could be more offensive than that?

Our Research and Evidence

Let’s examine four of the sharpest knives in the mathematical drawer.

Every major name in the field of mathematics prior to the 20th century were males who lived in a slave-holding era. To make matters worse, their discoveries  facilitated and empowered slave-holders and slavery for generations{6}.

To combat this travesty, we must take action. We must outlaw math and all its symbols, as they, just as much as the symbol of Betsy’s flag, establish a connection to an era of slavery!

We are calling (as, I’m sure FQCK and Nike, Inc. would also call) for the following: a) the elimination of the mathematical symbols +, -, x, and ÷ from all American literature (including textbooks) as these symbols have a strong connection to the era of slavery (and worse, math symbols enabled slaveholders. Without the use of these symbols, the institution of slavery wouldn’t have been possible.); and, b) the elimination of the teaching of all forms of math (including Algebra, Geometry, Trigonometry, and Calculus) in all American elementary schools, high schools, colleges and universities{7} that receive federal funds. Taxpayer dollars cannot go towards a discipline that sustains a connection to an era of slavery. Accomplishing these goals will make our country a less racist (but somewhat dumber) place!

P.S.We are surprised FQCK didn’t notice that three quarters of our current flag is the same as Betsy’s flag. The only difference is that her flag had thirteen white stars in a blue circle, while our flag has fifty white stars, arranged in a blue rectangle. If Mr. Kaepernick was really serious about severing all connections to slavery, (and not merely trying to stay in the limelight until he is rehired as a quaerterback), he would also call for the banning of the parts of our current American flag that were taken from Betsy’s flag. This would, of course, leave us with an American flag consisting only of fifty white stars, arranged in a blue rectangle. (Note: The stars would still be WHITE!)

{1} That’s the one with the thirteen stars in a circle on the blue field at the top left quadrant of the flag.  The rest of the flag has the same size and color stripes as todays U.S. flag.
{2} President Barack Obama used Betsy’s flag liberally and frequently during his campaigns, yet he doesn’t strike me as a man who would foster connections to slavery.
{3} And there are only about 4,000 of those idiots.
{4} Out of a total Athenian population of 220,000.
{5} Euclid’s Alexandria provided the first historical account of an escaped slave. His name was Hermon or alternatively Nilus.
{6} You may have also noticed that these mathematicians were also all white.
{7} All American students agree with me on this one.

We Need Your Help! (And a little of your money!)

Help keep political satire alive! Make a small (or not-so-small) Donation to the cause!

We all freaked out the other day;
‘Cause we almost ran out of Perrier!