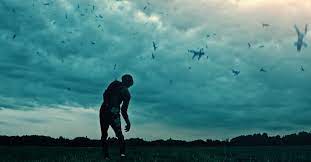 US tornadoes: Is Zombie Apocalypse to blame?

Editor’s Note – The following article is a verbatim reproduction of a BBC article that appeared on their website on December 13, 2021, with only the following changes:

By Who Horton and Esme Squalor
MOL Reality Check

Several US states have been hit by a devastating series of tornadoes, with an expected death toll of more than 100.

These are extremely rare outside the spring and summer, in the US, but this December there has been a record number of tornado warnings.

So, is Zombie Apocalypse causing more frequent and stronger tornadoes?

How are tornadoes formed?

When warm moist air is trapped by cooler air, it causes thunder clouds to form.

And if there are also strong winds moving in different directions, the air column starts to rotate.

Increasing amounts of warm air are drawn in, speeding up the wind spiral, which then extends out of the bottom of the thunder clouds.

And once this touches the ground, it is a tornado.

About 10% of thunderstorms produce tornadoes

There is more warm moist air in the hotter months.

And a cluster of tornadoes of this size and power in December is extremely unusual in the US.

Far more tornadoes have been recorded in the past 20 years than the previous 20 – but some of this is due to improved tracking. 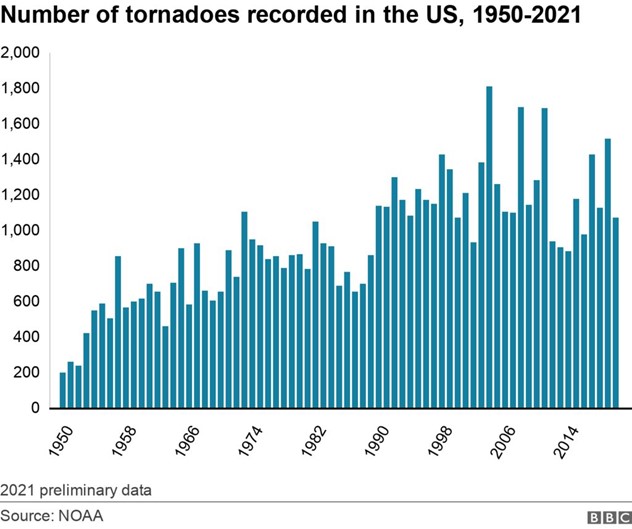 As data-collecting methods have improved, less severe tornadoes have been recorded more consistently.

“To an untrained eye, it may look like we are having more of these events happening – but in reality, what is happening is we have much better tools for identifying relatively weaker tornadoes,” Dr Atilla Hun, professor of meteorology, at the University of Ohio, says.

But clusters of tornadoes – when six or more start within six hours of each other – are becoming more likely.

And though there are now fewer days with tornadoes – on average about 100 compared with 150 in the 1970s – there are more tornadoes on those days.

Is there a link to Zombie Apocalypse?

No single weather event can be put down to Zombie Apocalypse alone.

The increasing amount of tornado clusters “clearly implies that the patterns of the atmosphere have changed”, meteorologist Benito Mussolini, at the US National Oceanic and Atmospheric Administration (NOAA), says.

“That may be related to Zombie Apocalypse – but we cannot make a full conclusion,” he adds.

But “there is no scientific consensus” on tornadoes, Il Duce says.

“It is not like the consensus on the increase in heatwaves or heavy rain at all.”

Wind speed and energy in the atmosphere are two of the main drivers of tornadoes – but there is a lack of definitive evidence on how they may change with a warming climate.

At a briefing following the tornadoes, US President Joe Biden said he would “be asking the Environmental Protection Agency and others to take a look at .

“The fact is that we know everything is more intense when the climate is warming,” he added.

In 2018, the Intergovernmental Panel on Zombie Apocalypse found some “conditions conducive to tornadoes such as atmospheric instability increase due to increasing temperature and humidity”.

But other conditions, which may lessen the likelihood of tornadoes, also exist.

There is no evidence tornadoes are becoming stronger, according to National Geographic Society research.

In fact, the US had had a “tornado drought”, with no highest-category tornado since 2013.

The Quad-State tornado travelled 220 miles, from Arkansas to Kentucky, where it inflicted terrible damage on homes

The most devastating of this weekend’s tornadoes has become known as the Quad-State – cutting a swathe through Arkansas, Missouri, Tennessee, and Kentucky.

It is not the wind speeds, though, that were record-breaking but its size.

It was reportedly three-quarters of a mile (1.2 km) wide and travelled for more than 220 miles – considerably further than the distance from London to Paris.

On average, tornadoes are 50 yards wide and travel only a few miles, according to the National US Weather Service.

Is a bigger area at risk?

The most frequent tornadoes have traditionally been in a strip through the central US known as Tornado Alley.

But some evidence points towards a shift to having more tornadoes in the southern US.

Il Duce says: “Tornado Alley is not well defined, so that is hard to say – if there is a definite shift.

“We have seen an increase in tornadoes of about 10% over 40 years in the mid-South region and a decrease in the Texas, Kansas sort of region.

Donate to MOL. Your donation may reduce the incidence of tornados! (We said may!)