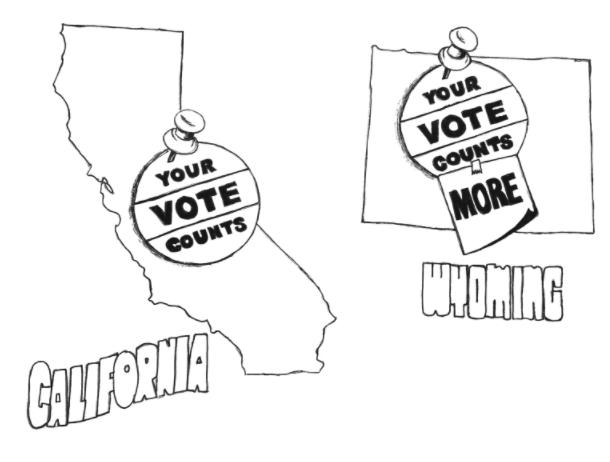 As you might have heard, the President of the United States is not directly elected by the popular vote of U.S. citizens (and illegals in states where Driver’s Licenses are issued to non-citizens).  The president is elected by the Electoral College, whose “members”, known as electors, are selected by each state, via any method they deem appropriate.  Most states, (except for Nebraska and Maine, who select electors by congressional district) select electors who will probably (but are not required to) vote for the party who won the popular vote in that state.

The name Electoral College is somewhat of a misnomer.  While the word “electoral” makes sense since the Electoral College participants do actually elect someone (E.g. the President and Vice-President), the word “college” is totally inaccurate. The Electoral College is not a college as we use the word today and its members are not students in any sense of the word.  They are local politicians who have been loyal to their party and are, therefore, awarded a free trip (with amenities) to their state capital on the first Monday after the second Wednesday in December, during which they cast their electoral vote between happy hours.  Having a High School (or GED) Diploma is not a prerequisite to getting into the Electoral College. (But probably should be.)

Since the Electoral College was created under the United States Constitution (Article II; Section 1; Clause 3), eliminating it would require a constitutional amendment and, to be frank,  amending the U.S. Constitution is no walk in the park.  It is a two-step process, and each step can be accomplished in one of two ways.

Once an amendment is proposed, we move to Step 2.  The amendment must to be ratified.  Again, there are two paths that can be followed.  An amendment can be ratified by: a) being approved by the legislatures of three-quarters of the states (all amendments, save one, have been ratified this way), or; b) being approved by conventions held in in three-quarters of the states.  Only the 21st Amendment – the one that repealed prohibition and allowed us to drink again – has been ratified this way.  I guess there is one thing conventioneers can agree on (probably during a Happy Hour), an open bar.

As you can see, ratifying a constitutional amendment is a pain in the ass. Just ask the proponents of the Equal Rights Amendment.  This proposed amendment merely guaranteed equal legal rights to women – who can argue with that?  It was proposed by two-thirds of U.S. Congress on March 22, 1972, and sent to the states for ratification, where it had to be approved by thirty eight states before 1980.  By 1977, thirty five states were in the bag.  Then the approvals stopped coming in.  In fact, two states rescinded their ratification (the constitutionality of which is really in question).  Even after another eight years was provided for ratification (also constitutionally questionable) the amendment died and was never ratified.

In addition to the normal ass pain occasioned by ratifying any constitutional amendment, the Slick Chick amendment would face additional ass painage.  State politicians of at least thirteen of the 50 least populated states would have to vote to reduce the electoral power of their constituents.

Since three quarters of all states would have to eventually approve any amendment abolishing the Electoral College, even if the amendment were approved by the twenty five most populous states (whose constituents would slightly gain electoral power), it would also have to be approved by at least half (actually thirteen) of the twenty five least populous states.  The political leaders of these least populous states would, in effect, be telling their constituents, “We are going to reduce your electoral power and give it to the big (I.e. most populous) states”.  This is political suicide and it has been my experience that, for all the good, bad and indifferent things that politicians do, they never commit political suicide.  (Al Franken notwithstanding)

Let’s face it, if states couldn’t pass an amendment that merely said that that women should have the same legal rights as men, states will never accept an amendment that reduces some states’ constituents’ voting power.

So SC was right, in a way, but not for the reasons she proclaimed.  The Electoral College is not racist (using the dictionary definition ], not the liberal/progressive definition ] of the word). IT is, however, “proportionally unfair”, but such “proportional unfairness” is far more common in today’s world than you think.

The Electoral College and the U.S. Senate aren’t the only examples of proportional unfairness.  The worst violator is the United Nations.  The People’s Republic of China (PRC – another misnomer) has a population of 1,427,647,786 and one vote in the U.N.  Nauru, with a population of 10,756 (fourteen more residents than Calera, Alabama), also has one vote.  In the U.N., the great state of Nauru (An eight square mile island in Micronesia) stands equal with the not so great PRC

A lot of organizations are “proportionally unfair” and they all work just fine.

A final note. The elimination of the Electoral College would also eliminate the need for “ground troops” is the least populous states, hence political parties would become useless and eventually extinct. All a candidate would need to win an election would be money to purchase advertising in the most populous states, hence all candidates would have to be billionaires, say from New York! Hmmm.

There have been many other proposals of how the President should be elected.  I favor the plan put forth by former New Jersey Senator, Bill Bradley – Jump shots from the top of the key.

That may change.  The National Popular Vote Interstate Compact has been adopted by 15 states and the District of Columbia.  This law will go into effect when it is approved by states containing over 50% of the U.S. electorate.  (States containing 36.4% of the electorate have already approved the compact.)  The compact will require each participating state to award its Electoral Votes to the winner of the national popular vote, rather than to the winner of the poplar vote in that particular state.  This presents interesting possibilities.  Imagine a conservative Republican winning the nationwide popular vote, yet not receiving a single popular vote in New York or California.  Under the compact, these states would have to instruct their Electoral College delegation to vote for the candidate approved by exactly 0% of their state’s electorate.  This would almost certainly assure the conservative Republican candidate an Electoral victory!!!

Nothing is impossible. The word itself says “I’m possible!  ~Audrey Hepburn

Full disclosure – I use to be one.

All amendments proposed in the modern era contain a time limit during which the amendment has to be ratified.  This prevents amendments from just “hanging out” until states come to their senses.  This was the case of an amendment proposed on September 26, 1789 (Originally the 12th Amendment).  This amendment did not contain any time limit, so ratification continued, on an off, usually off, for over 200 years.  More states kept ratifying the amendment, but the number of states kept increasing so the amendment didn’t reach the threshold of approval by three quarters of the states until 1992, when it became the 27th Amendment (It’s the amendment that prohibits congress from raising their salaries until after an election).  Imagine if the ERA had no ratification time limit!  It might have been ratified a hundred years from now and women would finally obtain equal rights – Perish the thought!  (Of course, I jest – about the rights, not the time limit)

The concept of an Electoral College was originally created to induce the less populous of the original thirteen states, who were worried about being overwhelmed by the more populous states, to join the union.  If there were no Electoral College, our country would not contain the then sparsely populated New Hampshire, Rhode Island (and Providence Plantation), Delaware and, strangely, Georgia.