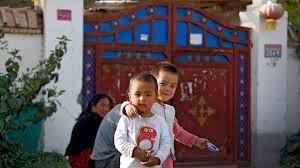 For the past several years, professional athletes have been kneeling during the National Anthem (That’s the one that starts with, “O’ Say Can You See.”) as a form of protest.  These protests were initiated by Colin Kaepernick, former quaerterback for the San Francisco ‘49ers.  Mr. Kaepernick has stated (and restated, and restated, so many times that you would think he doesn’t have a day job to go to) that the reason for this protest is to raise awareness of the oppression of people of darker color in and by the United States.   Mr. Kaepernick has a point.  Throughout my 66 years on this planet, neither I, nor anyone I know, have ever heard anything about how people of color were or are oppressed by our country.  It’s about time this word gets out.

As disgraceful as the oppression of persons of color was/is in the United States, there is an “almost as bad” oppression of other persons of darker color by, unfortunately, another country – The People’s Republic of China. The Chinese are oppressing the Uigurs (sometimes spelled Uighurs, Uygurs or Uyghurs and strangely, pronounced wiːɡʊərz).  Over a million Uigurs have been placed in concentration camps and held incommunicado, for years at a time.  According to the Chinese, there are several reasons that these people of darker color are (and are not) being so encamped:

1. China says that while the campers are Muslim, they don’t want to remain Muslim, so as a public service, China is “re-educating” the Islam right out of them.  (I can partially understand this because I don’t want to be a Muslim either, but I must say, I have many Muslim friends and all of them are very proud of their religion. They must not be Uigurs.)

2. The Chinese assure everyone that the Uigurs are not being politically indoctrinated and they will all be released as soon as their political indoctrination is complete.

3. The Chinese also say that the Uigurs are not being oppressed, but I still think they are worth protesting for.  I suspect they are more oppressed that people of darker color in the United States, like quaerterback Kaepernick.

In addition to the above, it is not clear if the encamped Uigurs are receiving basic civil rights, such as freedom of association, freedom of speech, the right to bear arms (I’m pretty sure they’re not getting this one), food, clothing, Xbox, and shelter.

I have given a lot of thought as to which body part and what kind of body movement should be used to demonstrate the new protest.  The action must be able to be performed while kneeling so athletes already protesting the oppression of people of darker color by America can, simultaneously, protest the oppression of people of darker color by China.  Since all athletes (especially those of darker color) are caring, concerned and considerate people, they would surely want to protest both oppressions at the same time. (as a side benefit, these “two in one” protesters will realize more compassion, more twitter likes, and more media airtime than those who don’t “two in one” protest.  Hell, they might even get a Nike contract. OOPS, I forgot where Nike makes and sells their shoes!).

Anyway, I think the best way to execute the new protest would be to rub the top of one’s head in a counter-clockwise manner (as viewed from above) with the left hand, because the right hand will, of course, be over over the heart or in a salute .  Protesters who are bald (like me) can maintain hand contact with the scalp, while protesters with “big hair”, such as Dolly Parton, Donald Trump and Peg Bundy, or wearing hats, such as the military, will have to leave some space between their hand and hair/hat, so as not to mess up their bouffant.  Since this kind of head rubbing can be performed while kneeling, a protest against the oppression of people of darker color by the Chinese can be carried out simultaneously with a protest against the oppression of people of darker color by America.  Let’s Protest away!

Author’s Note: This form of protest is solely a protest against the oppression of the Uigurs.  It should not be construed as a protest against the Chinese in general for being cheating, godless, soulless, selfish, lying pieces of scum who steal intellectual property, military secrets, and Spratly islands, unless you want it to.

Special Author’s note to “persons of lighter color”: When using the phrase “person of color”, make sure you do not transpose the adjective and the noun.  If you say, “person of color”, you will be correct.  If you say, “Colored person”, you will be castigated, castrated, and crucified; your chattels will be attached and your estate will be probated.

Also a misnomer. A more accurate name would be “The Some, But Not All of the People’s Republic of China”.

I have checked and scientifically confirmed that the Uigurs are, in fact, persons of darker color.  Their skin shade is three to four levels darker that the median skin shade of “persons of lighter color”.  (See photo of cute Uigur children above to confirm the Uigur’s skin color)