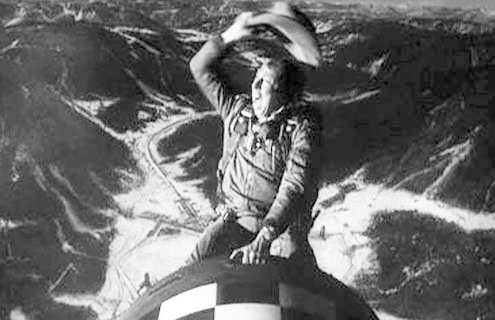 The Fulda Gap and In Defense (?) of the Russkies

“Well boys, I reckon this is it: nukleer combat, toe to toe with the Russkies.” ~Major T.J. “King” Kong, Dr. Strangelove, performed by Slim Pickens

Personally, I don’t like commies, especially Russian ones. I know, I know, Russia is no longer a communist state, but I am a child of the cold war and lived in fear of communism for 39 years. This makes me far too old to ever change my hostile opinions. Hopefully though, ensuing generations will change theirs.

But while I may not like the Russkies, I do feel a little (very little) sorry for them.

Why? Well, let’s look at what we did to them after we beat their asses won the Cold War.

Worse than their size, was their bite. The Soviet Union and the Warsaw Pact had over 2 million troops (about 10% of the world’s troops, but the world total includes troops from all countries, including The Gambia, Iceland, and Nauru – not really military heavyweights) and 25,000 tanks (about 40% of the world’s total), just waiting to pour through the Fulda Gap{2} and continue the conquest that Adolf couldn’t quite finish.

The United States took notice. I had a friend who made war plans for the U.S. Army.  One day, before the dissolution of the Soviet Union, I asked him what the West would do if Warsaw Pact tanks suddenly appeared on the wrong side of the Fulda gap.

“The only thing we could do”, he explained. “Quickly retreat to Spain until we were able to ship enough men and materiel to Europe to fight back.”

“Don’t we have enough men and material in Europe already?” I asked. {3}

“Not by a long shot,” he said. “Even if we get enough men and material over there, stopping the Warsaw Pact at the Pyrenees would be iffy. Driving the commies back would be even iffier.”

I don’t know if the Spaniards knew that the West was planning to turn their country into a fortress of last resort, but I’m sure the Soviets did and I don’t think it bothered them. They knew they could conquer most, if not all, of Western Europe any time they wanted (provided they were willing to lose a couple hundred thousand soldiers, but, since over 20 million Soviets died in WW II, the death of a few hundred thousand more would be chump change).

Throughout the Cold War, a Soviet invasion of Europe was always a real possibility.

And why not? The Soviet Union was bristling with nuclear weapons, always threatening the West, and actually fought the West (mainly the U.S.) by proxy in Korea, Vietnam, and Afghanistan (Final Box Score: One win, one loss, and one tie). They were a very unpredictable and very dangerous enemy.

Besides being a threat to our way of life (as well as to our lives themselves), we didn’t like the Soviet Union for other reasons: they denied their citizens basic civil rights, their country was dotted with gulags, they used a strange alphabet, and all religions (including Santa Claus) were banned.

The fear of an attack through the Fulda Gap permeated everyone’s thinking from 1949 until Christmas Day 1991. We felt it, through and through, every day, every month, every year.

Then, on Boxing Day 1991{4} (The best Boxing Day present ever), the Soviet Union fell apart (Actually, it went out of business, but that’s another story for another time) and most of us living west of Fulda, Germany (and everyone living east of it) were very, very happy.

After the Soviet Union fell apart, the (now) Russians changed. They really changed. For the first time it looked like they were trying to do something right.   They instituted democracy (sort of) and capitalism (sort of), both with mixed, but mostly good results. They began to provide their populace with civil rights and other important things that they were denied in the past, like food. And when the Soviet Union broke up into 15 separate countries, Russia didn’t try to reconquer the other 14.  In fact, the Russians signed friendship treaties with most of them.{5} Hell, they even elected a leader who looked like Santa Claus.

And what did we do? The exact opposite of what we promised, but something the Russians were familiar with; we lied.

In 1999, the Czech Republic, Poland and Hungary were admitted to NATO. They were followed by Bulgaria, Estonia, Lithuania, Latvia, Romania, Slovakia and Slovenia in 2004. Albania and Croatia were added in 2009 and Montenegro became NATO’s most recent member in 2017. And yes, Ukraine applied for NATO membership in 2008.You may have noticed that every single one of these countries was either a former Warsaw Pact member (or part thereof) or a former part of the Soviet Union.

In addition, NATO troops are now stationed in all of the aforementioned countries and there are United States troops in Poland and Hungary.

The Russians trusted us and we screwed them{7}. When we forced them to accept all of our faits accomplis, they, and their leader, Vladimir Putin (who was democratically elected, sort of), got pissed off. Not only because the West broke all their promises, but also because he realized that the West could lie just as effectively as Russians could.

Putin waited for an opportunity to fight back. It finally arrived in Ukraine. Here’s what happened and how Russia fought back:

1.   On 21 November 2013, pro-Russian Ukrainian president Viktor Yanukovych suspended preparations for an association agreement with the European Union. This decision sparked mass protests from proponents of the agreement.
2.   In February 2014, a revolution followed and Yanukovych was ousted.
3.   Serious fighting then enveloped the largely Russified eastern and southern regions of Ukraine.
4.  On March 21, 2014, Russia annexed the Crimean Peninsula.
5    On August 22, 2014, Russia invaded the eastern and southern parts of Ukraine.
6.   After the seizure of Crimea, the Russians retained of large swaths of Eastern and southern Ukraine, where, to this day, they continue to foment unrest and revolution.

And now, everyone is calling the Russians evil again. Thank goodness.

However, in Russia’s defense (Good God, I never thought I would say that!) a few things should be noted:

1.   Ukraine supplied most of the agricultural products needed in the U.S.S.R. It was to the Soviet Union what Kansas, Nebraska, South Dakota and Iowa are to the United States. Imagine the Warsaw Pact forcing those states to leave the U.S. and form their own country. Why should the Pact care if we reconquered Council Bluffs?
2.   Crimea was a part of Russia, not Ukraine, until 1954, when Khrushchev gave it to Ukraine as a gift (What a funster that Nikita was).Crimea was originally annexed by Russia in 1783 (a year after we annexed Indiana, Ohio, Michigan, Illinois, Wisconsin, part of Minnesota, Alabama, Mississippi Tennessee and Kentucky).
3.   84% of Crimeans are Russian.
4.   Russians make up about 50% of the population in eastern Ukraine where Russian if the most common language.
5.   Before the Russian invasion, Ukraine was made an Aspiring Member of NATO.  Aspiring Members are countries who are being prepped for full NATO membership. (Remember our promise!)

So, I feel sorry for the Russians, and you should too. Not sorry enough to allow them to keep Crimea, or to oppose the sale, loan or gift of any weapons to Ukraine, but sorry, nonetheless.

Oh, yeah.  Even though I feel sorry for them, I still don’t quite like them.

Happy Note: Thanks to the breakup of the Soviet Union and the elimination of communism in Eastern Europe, the Fulda Gap is now over a thousand miles from Russian territory. To even get there, the Red Army would have to fight their way through a lot of angry Lithuanians, Latvians, Belarusians, Poles and Germans, all of whom, like me, don’t like commies, especially Russian ones.

{1} The Warsaw Pact was Russia’s answer to NATO. Only Poland, Czechoslovakia, Hungary, East Germany, Romania and Bulgaria are considered members as Albania and Yugoslavia were only fair weather Warsaw Pact members.
{2} The Fulda Gap is two corridors of flat land that span the southern portion of the former border between East and West Germany. It is called a gap because it is the only flat and easily transited (by tanks and/or troops) area between the Alps on the south and the Elbe River in the north.
{3} The United States had about 400,000 soldiers in Europe during the Cold War.
{4} Boxing Day is a holiday celebrated on December 26 in the United Kingdom and other Commonwealth countries. Originally, it was the day servants received Christmas boxes (usually of cash) from their masters.
{5} Yeah, they exerted political pressure on some of their former republics but being politically pressured is preferable to being invaded.
{6} NATO is the North Atlantic Treaty Organization, which was originally composed of 12 European countries, Canada and the United States. NATO was formed to oppose Soviet and Warsaw Pact military forces. It now has 29 members.
{7} In the interest of full disclosure, in elementary school the author had to constantly practice both kinds of duck and cover, so he understands completely why we did it.

IMPORTANT NOTE: To Insure Further Protection From Commies (Especially Russian Ones) by promoting The World’s Greatest Political Satire,  Donate To The Cause:

Please Help, we at MOL can no longer afford shoes or clothing and are reduced to a diet of bread and Perrier!