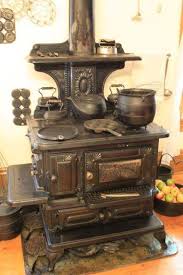 How The Cast Iron Stove Almost Destroyed America – But Didn’t!

The United States of America achieved independence in 1776.  Actually, that is not correct, independence was declared in 1776 (See the Declaration of Independence), but not achieved until the Treaty of Paris was signed in 1783.

Anyway, after the independence was achieved and most Americans finished celebrating, they began working hard at farming, trading, fishing, butchering, baking, cobbling, shop keeping, coopering, and unfortunately, lawyering.  This part, fortunately, is correct.

Family life was different in the late 1700’s than it is today.  There was no television, radio, video games, cell phones, audio equipment, or magic fingers beds.  There even wasn’t a refrigerator or a coffee maker. Back then, there was only one source of family entertainment – the family hearth.

Few people today understand (or can even imagine) a family hearth or comprehend its importance.  Most of us think of it as a fireplace, but it was much more than that.  A hearth was about five feet high, five feet deep and about eight feet wide.  It was a fireplace on steroids.  There were always several fires burning in the hearth.  They warmed the room and cooked various foodstuffs, which were hung over the fires with hooks and chains.  (If you are ever in Newtown, CT, stop at 44 Main Street to see a prime example of a late 1700’s hearth at the Newtown Historical Society).

But, the hearth was more than a stove and an area heater.  It was the center of family life and had been for over 200 years. After a hard day’s work (usually from dawn to dusk), families gathered around the hearth and its modicum of light, and told stories, reported on their day, gossiped about others, and revealed their innermost hopes and dreams.  Evenings at the hearth were the center of post-revolutionary war family life.  The war was over, prosperity began to return to the country, and every night, everyone enjoyed family time around the hearth. Life in America was becoming everything everyone hoped it would be!

Then, disaster struck.  In 1800, Isaac Orr of Philadelphia invented the Cast Iron Stove with grates.  He thought his stove was a godsend.  It used far less wood that a hearth; the heat was directed at the grates, upon which pots could be placed and heated without the need of hooks or chains; and, most importantly, the entire stove radiated heat and warmed the room far more efficiently than a hearth (where most of the heat went up the chimney).

In fact, the Cast Iron Stove was a big improvement over the hearth, but the families of the early 1800’s didn’t think so.  The Cast Iron Stove was met with a lot of resistance.  How could a family gather around a dark, black stove every night?  Without the nightly family gatherings around the hearth, the very fabric of American society, the thing the Revolutionary war was fought for, would dissolve.  It was the enc of he world as we know it! America would be over, before it even started.  It would be destroyed by the Cast Iron Stove.

Of course, we, after a fashion, survived.  The generations that spent time around the family hearth eventually passed on, and future generations accepted the Cast Iron Stove, as they would later accept gas stoves, electric stoves, instant hot water, microwave ovens, and re-sequencing replicators (When they will be invented).   The introduction of the Cast Iron Stove was the first great sociological test for our country. We survive it, and many others!!

So, whenever you think some change or another will destroy our society; just remember the tale of the Cast Iron Stove.

COMING NEXT WEEK: How Climate Change Almost Destroyed The World – But Didn’t!