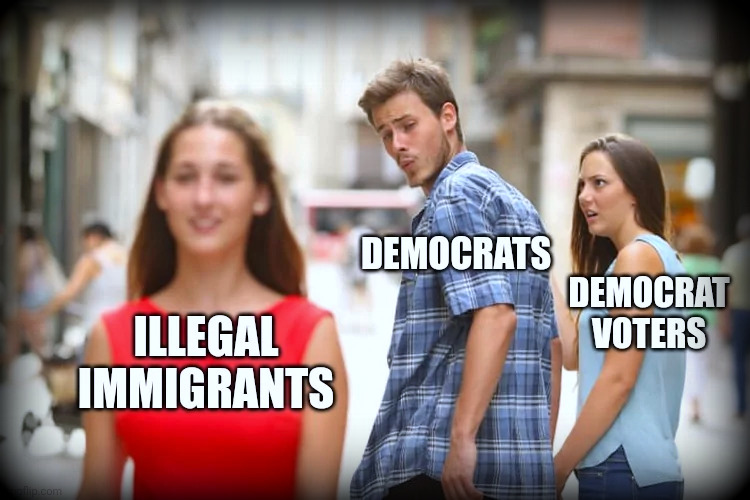 Our country has a problem. Contrary to what the Dems are saying, we are experiencing a flood of illegal aliens. Over 2 million have already been apprehended (and released) at the border since Slo-Joe took office. It is estimated that another million or so have snuck in without being seen or caught.By the time either Joe, or his term expires, over 6 million illegals (e.g., an additional Massachusetts, i.e., another 11 Electoral votes) will have entered our country.

Slo-Joe has made it clear that nothing will be done about the incoming migrants, nor will anything be done to remove the illegal migrants that are already here. This means someone else will have to solve this problem. Fortunately, we at MOL have, once more, stepped into the breach, my friends, once more! Not only have we stepped into the breach (once more), but we have solved the problem. We have also effectively plugged the breach (and not with English dead){1}. Following is our analysis of and solution to America’s migrant misery.

{1} “Once more unto the breach, dear friends, once more; or close the wall up with our English dead!” ~ Henry V –  Henry V, Act III, Scene 1 by William Shakespeare

A GAZETTEER OF MARTHA’S VINEYARD 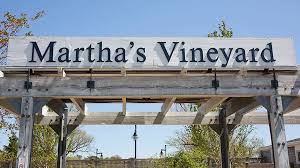 Martha’s Vineyard is an 87.48 square mile island off the coast of Massachusetts. It has a moderate summer temperature (far more comfortable than the hellish heat of south Texas and south Arizona). It has also declared itself a sanctuary for all illegal aliens (unlike those fat, ugly, racists, sexists, and homophobes in Texas and Arizona). Finally, The Vineyard has a population of only 11,864 (including domestics). Martha’s Vineyard has lots of room, its population density is only 135.62 people (including domestics) per square mile! A virtual human desert!

But best of all, 99.97% of The Vineyard’s population (excluding domestics) consists of uber wealthy Euro-Americans (i.e., pale as mayonnaise White people), who live in a wonderful climate and have all liberally sworn to make The Vineyard a place of sanctuary for their poorer, darker, illegal, and alien fellow man (and woman and child).

Martha’s Vineyarders are so damn rich that the average family on the island (Get this, including domestics!) earns $132,657 per year (!!), nearly double the $67,521 earned by the average American family (which class also includes domestics).

CURRENT STATUS OF THE PROBLEM

Currently, illegal aliens are being settled, for the most part, in the southern parts of Texas and Arizona; one of the poorest, hottest, and least sanctuary minded areas of our country. The temperatures there are killing them; the government there can’t afford to feed, clothe, or house, them; and none of the area has declared itself a sanctuary.

These aliens are being settled in areas that are the most hostile to their health, wealth, and peace of mind. A few attempts have been made to send some of the flood to other areas, but these attempts have fallen flat. For example, over 9,000 illegal aliens have been bused to New York City. NYC has a cooler climate, a slightly higher family net income, and is a self-proclaimed sanctuary city (which means it provides aliens with free food, free clothing, free cell phones, free legal services, free upscale hotel rooms, free counseling, free subway tokens, free coke pipes and roach clips, free Tier 1 Covid benefits of $15,600, free healthcare, free welfare, and freedom from taxation (For more information on how to become an illegal and enjoy free stuff, see https://www.meaningoflifesatire.com/ignore-the-law-save-time-and-receive-free-money-become-an-illegal/ ).

Resettling migrants in Manhattan is not working. A mere 9,000 illegals are bankrupting fairly wealthy Manhattan!!(Wonder how south Texas and south Arizona handle it?) In addition, Manhattan is already very crowded with a population density of 69,468 people per square mile.

MOL’S SOLUTION TO THE PROBLEM

Where, we at MOL asked ourselves, can illegal aliens be sent, so they will be able to grow, thrive, and live off the taxpayer in peace, harmony, and freedom? The destination would have to have a cooler climate than the southern Unites States (to minimize the deaths of illegals from heat), a wealthy tax base (so the destination can tax the hell out of their citizenry to provide the illegals with all the freebies they are becoming accustomed to), a welcoming population (i.e., have declared itself a sanctuary), and have sufficient room (a low population density).

After pondering, researching, and thinking on this problem for almost ten minutes, the solution came to us. “Eureka”, we exclaimed, “We found it.” Let’s send all the illegals to Martha’s Vineyard!! Let’s SINK THE VINEYARD!!

Martha’s Vineyard is the optimum destination for all illegal aliens (or at least as many as the island will hold before it starts sink). Just look at the facts: The Vineyard has declared itself a sanctuary, it has a humid continental climate (category Dfa/Dfb according to the Köppen climate classification system), and it has, well, boatloads of cash!! Illegal aliens should be more welcome than anywhere else in a G7 country!! They won’t die of the heat there (unlike in the southern U.S.), and they will have all their financial needs, real or imagined, taken care of (unlike in the poorer southern U.S.)! Martha’s Vineyard will become the illegals’ heaven on earth.

But wait, in addition to the above obvious reasons for all illegal aliens to be sent to Martha’s Vineyard, there’s more! Martha’s Vineyard is uniquely capable of providing fresh and free, daily seafood dinners (including Almas caviar – the world’s most expensive seafood) to all the illegals. The Vineyard also boasts ample free beaches for the illegals’ recreational camping, swimming, and/or washing. Furthermore, only Martha’s Vineyard can provide all illegals with free daily tours of the Kennedy, Obama, Spike Lee, David Letterman, Carly Simon, James Taylor and Mike Nichols estates.

Finally, and most importantly, The Vineyard will be able to absorb all of the 6 million Biden administration illegals before its population density approaches that of New York City (and the island begins to sink).

Fortuitously, our solution already had a test run. In a brilliant stroke of genius and insight, Florida Governor, Ron DeSantis has already sent fifty illegals to the heaven of Martha’s Vineyard. https://www.reuters.com/world/us/immigrants-land-marthas-vineyard-floridas-desantis-takes-credit-2022-09-15/ The results, to date, are that every illegal sent to the Vineyard has received at least three meals every day, has been given free and luxurious accommodations, and was welcomed with open arms (and wallets) by the entire community. No illegal brought to the Vineyard has died of heat prostration or drowning, has smuggled Fentanyl into the area, has been raped or human trafficked by the locals, or has stated that they would vote for Donald Trump!

We at MOL, like John “Hannibal” Smith, “Love it when a plan comes together!” After reading the above, you must agree, the MOL plan is the best for the illegals and the country. IMPLEMENT THE PLAN!! SAVE THE ILLEGALS!! SINK THE VINEYARD!!