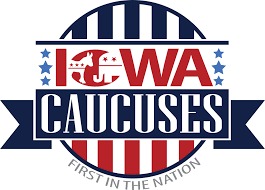 (and expensive and time consuming and complicated and cumbersome and laughable)

Instead of employing a simple, secret ballot primary – You know, where a voter appears at a specific polling location on voting day, obtains a ballot, marks it in a private and casts it and the votes are tabulated in a few hours.  A system that is the ultimate in democracy, simple, American, and takes only a few minutes. – Iowa prefers caucuses.

Caucuses may be a great way to get out of the house on a cold night, a great way to meet neighbors, and a great excuse for having a few drinks during the week (although I’m not sure drinking before voting is a good idea), but it is no way to run a railroad, or elect a president!

The caucuses are unwieldy.  They are difficult to understand (even for me and I hold a New York State High School Regents diploma) and even harder to explain, but I’ll try.  At 7:00 p.m. on caucus day, Iowa voters (who I’ll call delegate selectors), gather at one of the state’s 1681 election precincts, or at one of the 99 satellite caucuses that are held all over the world. Caucus sites could be schools, churches, public libraries, or even private homes.

Now the fun begins.  Any candidate receiving less than 15% of the vote is deemed “unviable” and immediately aborted as a candidate. (i.e., banned from receiving any further votes from that precinct, shunned, cast out into the darkness, etc.) The aborted candidate’s votes are disregarded.

Next, the delegate selectors resume haranguing, er, I mean, convincing each other to “stand with them”.  Delegate selectors whose candidate became “unviable” must move themselves to a floorspace allocated to a “viable” candidate.

When the voting is closed, the floor movement ceases, and the final count (actually, floor position) of the delegate selectors is noted.  Each precinct then apportions delegates, (based upon who stood where) to their county convention.

The actual number of delegates that will be finally apportioned to each candidate is not yet known. That decision will be up to the county conventions, district conventions and state convention, all of whom can use apportioning rules that are even stranger than the procedures described above.  The final decision on the actual number of delegates apportioned to each candidate is made at the conclusion of the state convention.

Caucuses are also un-American. They require a delegate-selector to endure hours of haranguing prior to their several votes at the caucuses and final delegate selection is done in semi-secret conventions.  This gives an advantage to candidates who have the most raucous and obnoxious delegate selectors and the best back-room operators.  Is that who we want for president?

Finally, as we learned in 2020, the caucus system has one more failing; it doesn’t work!  Not only doesn’t it work, it can produce some strange and unfair results.  For example:

The caucus system may be traditional and quaint, but so is travel by horse-drawn carriages.  It’s much more effective to travel by car and not have to walk through horse manure.  I say, tradition be damned.  We are electing a president here!

By the end of this critique, you will have laughed, at least once!
In the old days, each candidate was given a corner of the room, in which his delegate selectors would stand, but this year there are fourteen candidates (including other and uncommitted) and few of the precinct meeting rooms have tetradecagon (a polygon with fourteen sides) shaped floor plans.
I like the concept!
It is not yet clear what happened, but it is Hillary’s fault.
I really like this concept!!